Pupils sit on the floor in class 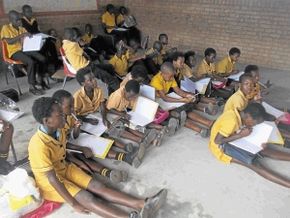 “The situation is pathetic. The mayor will write to the department and will seek help from local business people. The school is a special case,” Rapinga said.

PUPILS at Matjeni Primary School in Tonga, Mpumalanga, sit on the floor in their classrooms with their books on their laps.

Executive mayor of Nkomazi Thulisile Khoza was shocked by what she saw yesterday when she visited the school to see if things were running smoothly.

Municipal spokesman Cyril Rapinga said though some education department officials were present during the visit, Khoza would write a report to the department.

“The situation is pathetic. The mayor will write to the department and will seek help from local business people. The school is a special case,” Rapinga said.

Some children sit on their school bags, while those who do not have bags sit on the floor.

Rapinga said most of the children attending the school were from poor families and did not have uniforms or school bags.

“How will children pay attention when they are sitting on the floor while learning? They will not be able to concentrate because they are not sitting comfortably.

“It is unfortunate because most schools I visited over the past two days are facing similar problems. The furniture is broken. The department needs to replace the furniture and make sure that all schools are in a good state,” Masango said.

Provincial department of education spokesman Jasper Zwane could not be reached for comment.

PEP’s finance department is looking for a Store Admin Clerk to ensure that all sales and expenses are processed monthly and that all deposits made ...